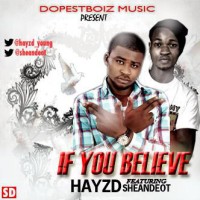 An afropopsinger,songwriter who is signed to a label(Dopestboiz muzik)which is managed by him,he has started music in the early age of 11 but professionally in the year 2012 and that is when he drops is first officially single titled "Feeling d Way" which really gain ground for him in is hood and every neigbhouring hood around d area he rep.....watchout for him coz he is storming d industry anytime soon........#Dopestboiz muzik#